Bell Canada’s bid to have the U.S. Federal Aviation Administration reconsider a 2012 decision that rejected a 500-pound weight increase for the Bell 429 has been denied. In a decision from deputy administrator Michael Whitaker dated Oct. 17, the FAA determined that “the case presented [for] reconsideration does not warrant a change to the original conclusions.” The decision goes on to state “there was no new information to consider beyond that provided in the original petition.”

In January 2012, Bell Canada sought an exemption from section 27.1 (a) of the Code of Federal Regulations that would have raised the maximum gross weight for the 429 from 7,000 to 7,500 pounds. The U.S. petition was submitted after Canada — and a number of other countries around the world — had already approved the 500-pound increase.

The FAA issued a denial in August 2012, and Bell Canada submitted an appeal in October 2012. In December 2012, the FAA received 57 comments from various parties including manufacturers, emergency medical service (EMS) operators, law enforcement agencies, helicopter maintenance facilities, government officials and others looking to purchase or operate a Bell 429.

In its decision to reject the petition a second time, the FAA fired back at a number of questions raised during the appeals process, including that the decision was political in nature based on U.S. manufacturers taking priority over manufacturers based outside the country. The FAA said it disagrees with this assertion.

Other comments in support of the petition were very general “without providing any additional information or quantifiable data not already addressed in the original denial decision,” the response notes.

The original 2012 denial “noted that the exemption sought by Bell Canada would place the Bell 429 at a competitive advantage,” the agency responds. “The point illustrated the unfair consequence that would result, which essentially amounted to a request to deviate from the applicability sections in parts 27 and 29.”

Some commenters said that certification of the Bell 429 under part 29 would either be economically unfeasible or would result in an increased cost to Bell Canada’s customers. “The FAA’s exemption process addressed whether a petitioner has met the agency’s standards, not the costs involved,” the denial states in response. “If Bell were to pursue certifying the 429 to part 29, which it has not to this point, the costs and benefits of stepping up to part 29 standards would be a business decision for Bell and its current 429 customers.”

The agency also asserted that the 2012 denial was consistent with past exemption requests, adding that Bell did not demonstrate how the weight increase would improve safety or benefit the public at large.

The manufacturer’s claim that the 429 meets “almost all” of the current part 29 requirements, the FAA notes, “gives even more weight to the position that [Bell Canada] could have, and should have, (as Eurocopter [Airbus Helicopters] did), sought certification of the Bell 429 under part 29 and requested exemptions for those part 29 requirements the aircraft could not meet.” While the FAA said it understands that certification under part 29 is a more involved process, the agency said it appears Bell Canada “wishes to be granted the same regulatory relief as Eurocopter and other manufacturers who pursued the more burdensome path, without taking that path itself.”


The FAA’s Decision:
“In consideration of the foregoing, I find that this grant of exemption would not be in the public  interest and that the case presented on reconsideration does not warrant a change to the original  conclusions. The petitioner may have submitted additional details to support its exemption petition  but there was no new information to consider beyond that provided in the original petition for  exemption. I find that there were no factual errors or incorrect interpretations of law,  regulation, or precedent by the FAA in the denial of the original petition. Therefore, pursuant to  the authority contained in 49 U.S.C. §§ 40113 and 44701, reconsideration of the petition of Bell  Helicop ter Textron Canada Limited for an exemption from 14 CFR § 27.1 is denied.”

With this approval, the Bell Helicopter Training Academy (BTA) is authorized to provide Part-FCL training courses for European customers, including the use of Flight Simulation Training Devices (FSTD) for the Bell 407 and Bell 429 aircraft models.

“The EASA ATO certification is a significant milestone for Bell Helicopter,” said Ray Lamas, general manager of global customer training for Bell Helicopter. “This certification enhances our ability to provide in-region pilot initial and recurrent training for our Bell 429 and Bell 407 customers in Europe, and is a critical next step towards the opening of our joint training facility with TRU Simulation + Training and Textron Aviation in Valencia, Spain.”

Bell Helicopter is the first organization outside EASA member states approved as an ATO to provide Part-FCL type training courses, including the use of FSTDs for the Bell 429 and Bell 407 aircraft. The two organizations recognized the event with a formal signing ceremony at the EASA headquarters in Cologne, Germany.

“The guidance and support the EASA certification team provided us in navigating through the ATO certification process was outstanding,” said Charles Fisher, senior manager, domestic training operations for the BTA. “We are honored to receive our ATO approval and look forward to furthering our relationship with EASA.”

The ATO approval is a significant step in the company’s plans to open a regional training center in Valencia, Spain in first quarter 2016. Announced in October 2014, the Bell Helicopter training center is a partnership with sister companies TRU Simulation + Training and Textron Aviation. The facility expects to open with a Bell 429 full flight simulator certified to Level D FAA and EASA/JAA requirements. TRU Simulation + Training plans to build the simulator at its facility in Tampa, Fla., and the training academy will be housed in Textron Aviation’s Customer Service Center located in Valencia, Spain.

The new center furthers the collaboration initiated at Farnborough where Bell Helicopter and TRU Simulation + Training announced their collaboration on the full flight simulator on the Bell 525. It also furthers Bell Helicopter’s commitment to increase resources and regional support in Europe, starting with the announcement that its facility in Prague, Czech Republic would serve as its official customization, delivery and aftermarket service center for Europe.

During its development, the Bell 429 was initially equipped with this "sleigh-type" landing gear, which infringed an Airbus Helicopters patent, a U.S. court has found. Mike Reyno Photo

In a ruling released on Jan. 27 — the latest development in a legal battle that stretches back to 2008 — U.S. Circuit Judge Robert L. Wilkins found that Bell copied Airbus Helicopters’ patented “sleigh-type” landing gear design in the initial development of the 429. That’s consistent with a 2012 ruling by the Federal Court of Canada, which found that Bell exhibited “deliberate and outrageous conduct” in copying the landing gear design.

Although Canadian Justice Luc Martineau took a dim view of Bell’s conduct in that 2012 ruling, he also found that the modified landing gear on production Bell 429s does not violate Airbus Helicopters’ patent. Later in 2012, a French court also ruled that the production 429 landing gear does not infringe the patent.

In the latest ruling, Wilkins agreed that the production landing gear is not a patent violation. However, he found that Bell has an incentive to resume use of the sleigh-type landing gear because of its lighter weight, thereby justifying issuance of the permanent injunction.

“Although Bell’s representative testified that Bell does not intend to use the original gear in the future . . . the Court is not convinced that it can rely on this representation,” Wilkins wrote. “Moreover, even if Bell voluntarily adopts a policy of using a different gear, Bell has in the past ignored its own policies with respect to intellectual property rights.”

The patent in question concerns the sleigh-type or “moustache” landing gear used on Airbus Helicopters’ EC120 and EC130 models. Sleek, lightweight, and particularly resistant to ground resonance, the landing gear was developed in the mid-1990s and subsequently patented in France, Canada, and the U.S., although Airbus (then Eurocopter) did not immediately mark the landing gear as patented.

In 2003, while developing the light twin-engine 429, Bell allegedly leased an EC120 for several months in order to study that helicopter’s landing gear. Bell then adopted a similar sleigh-type design as the baseline landing gear for its 429, using the gear during certification testing and displaying it at Helicopter Association International’s 2008 Heli-Expo in Houston, Texas. Moreover, also in 2008, Bell presented a technical paper on the landing gear design at American Helicopter Society International’s 64th Annual Forum, misrepresenting the gear as its own invention, according to Wilkins’ ruling.

While Wilkins granted that “customers generally do not make their purchasing decisions based on the landing gear of an aircraft,” he found that Bell’s use of the sleigh-type landing gear allowed the company to accelerate the 429’s development program. That early entry into the marketplace likely harmed sales of Airbus’ light twin-engine EC135 and EC145 models, which have seen their market shares decline since the 429’s certification.

In requesting the permanent injunction, Airbus noted that sales of the 429 in the U.S. are currently being constrained by the aircraft’s weight (as the U.S. Federal Aviation Administration has denied Bell’s request to increase the maximum gross weight of the aircraft from 7,000 to 7,500 pounds). Airbus argued — and Wilkins agreed — that Bell therefore has an incentive to resume use of the sleigh-type gear, which would achieve a weight savings of approximately 10 to 20 pounds. In his ruling, Wilkins cites testimony that “'[e]ven half a pound matters when trying to minimize helicopter weight.”

In an email to Vertical, however, Bell dismissed this argument, describing the prototype landing gear as “only marginally lighter than the production gear.”

“Bell Helicopter takes great pride in its business integrity,” the company stated. “We have and will continue to respect the intellectual property rights of third parties. We are pleased that the U.S. Court joined the courts in France and Canada in rejecting [Airbus Helicopters'] claim that the 429 production gear infringed [Airbus Helicopters'] patent. All Bell 429s have been and will continue to be delivered with the current production gear. The subject of this injunction is a prototype skid gear that was never certified and was never delivered on any Bell 429.”

Procès Bell Airbus Train 429
French Court Reverses Course on Bell 429 Skid Patent Row
Last week, the Paris Court of Appeals reversed an October 2012 . by France's
Tribunal de Grande Instance de Paris that held the design of Bell Helicopter's skid gear on its 4291ight
twin did not infringe on an existing Eurocopter (now Airbus Helicopters) patent. ln a statement released
to AIN last night, Bell again de nied patent infringement and accused Airbus Helicopters of unfair '·legal
maneuvering."
The company noted that prior court decisions in the U.S. and Canada on the matter had gone against
Airbus. "Every legal review to date has upheld that the production landing gear on the Bell429 does not
infringe on Eurocopter's patent." Bell said it is "studying the decision and assessing the impact it may
have to Bell429 operations within France." Further, Bell will continue delivering 429s outside of France
"without interruption" and "vigorously defend the production gear in France." Currently, one Bell429 is
based in France. Bell said it is working with that customer to meet their immediate needs.
vanhoute 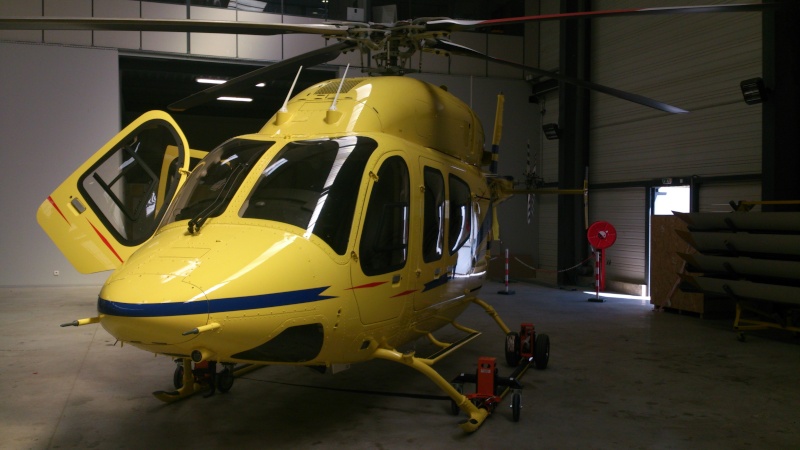 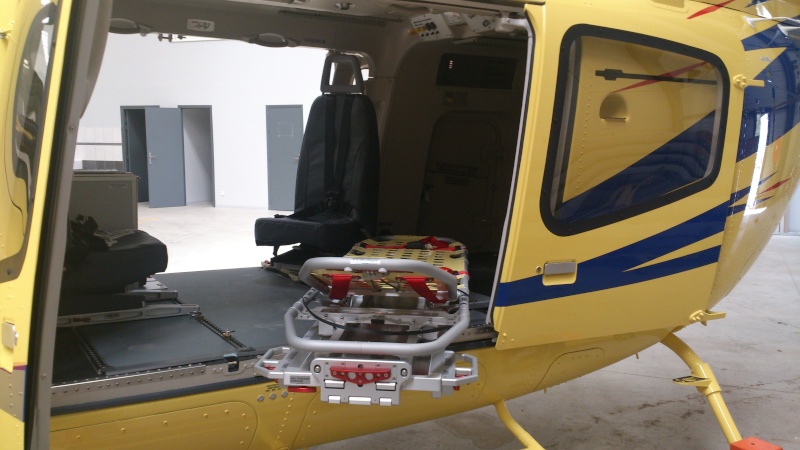 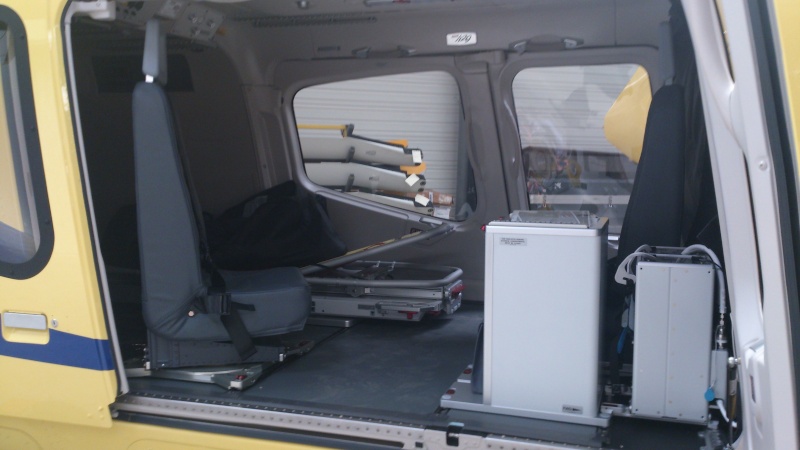 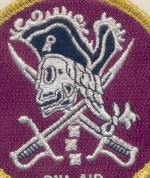 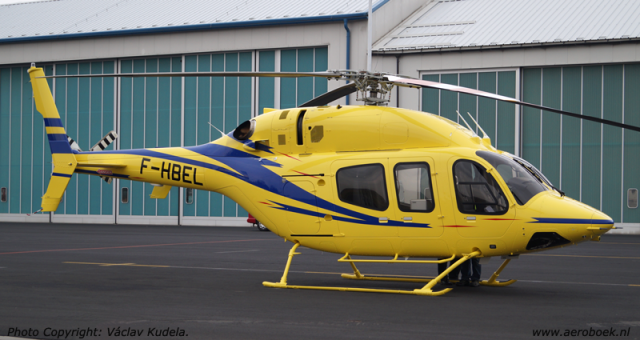 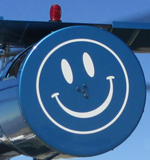